Over 1.2 million Australians play netball regularly. It is the leading women’s participation sport and the top team sport for ages 15 to 24 . All ages play netball and it is a fantastic sport to develop health and fitness. Netball involves high speed, deceleration, twisting and pivoting. Because of this knee injuries are relatively common.
The knee is the most commonly injured joint in Netball. 25% of major injuries reported from netball involve rupture of the ACL. This is a devastating injury to netballers as it usually requires surgery, prolonged rehabilitation and time away from the sport. Other less severe knee injuries occurring during netball include ligament sprains, dislocated knee caps or torn cartilages. 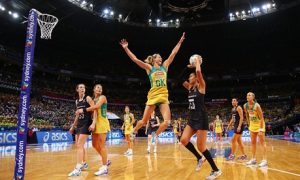 So, I have injured my knee while playing netball, how do I know if it is serious?

Most people that sustain a severe injury to their knee know straight away they have done something major. Other clues include:
– Snap or pop: If you hear or feel a noise it means something has broken or ruptured.
– Can’t walk on it : If it is too sore or unstable to play or walk on serious damage is likely.
– Immediate swelling: Usually signifies bleeding into the knee and thus, a serious injury.
If any of the above occur you should rest, ice , elevate and compress the joint and then get the knee examined as soon as possible. Your GP, Physio or Orthopaedic surgeon can examine your knee injury. 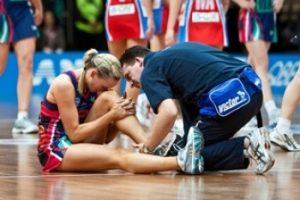 Will I need surgery?

You will need surgery if you have ruptured your ACL or torn your cartilage.
ACL reconstruction is the standard treatment for a torn ACL. It involves surgery to replace the ruptured ACL with a tendon from elsewhere in your body. The rehab is long but the results are good. If you have torn a cartilage (meniscus) knee arthroscopy is usually required. This is simple day case keyhole surgery. Most people are back playing sport 4 to 6 weeks after arthroscopy.

How can I prevent knee injuries while playing netball?

There is now good evidence that injury prevention programs do work to limit the number of knee injuries. Netball Australia has a KNEE program that consists of a number of knee exercises that can be incorporated into the warm up and main part of netball training. These aim to improve player’s technique, strength and agility. Which is especially relevant to preventing knee injuries.

In conclusion Netball is a fantastic and safe sport. It is possible to injure your knee playing, but a good assessment and treatment plan can get you back on the court as soon as possible. Contact Dr Benjamin Hewitt, to arrange a consultation if you suffer a knee injury.

If you are a GP or physician you can refer a patient to us here.

Find out more information on fees, hospital admission and making an appointment.

If you cannot find what you’re looking for, our Frequently Asked Questions pages may have the answer.